European history tends to have a heavy emphasis on written sources, and the majority of history we teach in schools is based on this written evidence. However, to appreciate medieval African History we need to use a combination of oral, archaeological and written sources to build a complete picture. Moreover, as history teachers, we tend to deliver lessons on topics that we studied at school and university because those are the ones with which we feel most comfortable. More often than not, this tends to be very Eurocentric. We may feel ill-equipped to approach subjects beyond our specialisms. I hope that these suggestions will allow you to gain some confidence in a new and fascinating topic.

An introduction to African empires and kingdoms 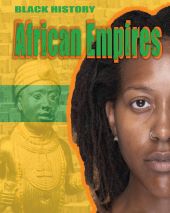 This book gives a concise introduction to the great civilisations of the African continent and the people who lived within these complex societies. Ancient and medieval African empires and kingdoms, including Mali, Songhai, Ghana and Benin are discussed. I have used the book to introduce pupils to important abstract terms such as ‘empire’, ‘civilisation’, ‘religion’ and ‘trade’, and to begin to look at the history of the wider world and the achievements of non-European societies.
The book highlights that the Kingdom of Ta-Seti was established around the Nile in approximately 3400 BCE, which means it predates the Romans, Greeks and Egyptians. In fact, there are arguments that say the Kingdom of Ta-Seti (or Kush) influenced aspects of the later Ancient Egyptian civilization, including hieroglyphics and pyramid structures. This shows pupils that there were over 4000 years of African History before the transatlantic slave trade and colonialism.
A colleague of mine designed an enquiry that I often use with this book. To begin the class enquiry, you can ask: “What does the evidence left behind tell us about Mansa Musa and the Kingdom of Mali?” I found this to be particularly effective as it focuses on evidential thinking and can be adapted to apply to many of the African kingdoms.
Find this book 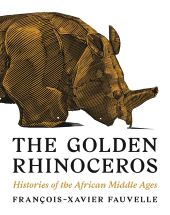 The Golden Rhinoceros: Histories of the African Middle Ages

In this book, archaeologist and leading historian Fauvelle shows how African royals, thinkers, and artists played important roles in the globalised world of the Middle Ages, from the birth of Islam in the 7th century to the voyages of European exploration in the 15th. The book includes examples of art, rare artifacts like the golden rhinoceros of Mapungubwe, ancient maps, and accounts left by geographers and travellers to shed light on political and architectural achievements, trade, religious beliefs, diplomatic episodes, and individual lives.
Find this book 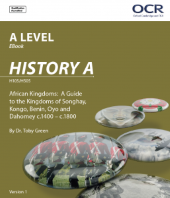 This free eBook is written to accompany OCR’s A Level History A specification and is accredited by the exam board itself. Both the textbook and the website on which it is hosted are an invaluable resource for the teaching of medieval African kingdoms to Key Stages 2–5. The book allows teachers to explore key themes such as Africa’s relationship with Europe, military powers, governments and bureaucracy, as well as the reasons behind the fall of kingdoms such as Kongo. I now use the eBook in conjunction with Dr Toby Green’s book 'A Fistful of Shells'.
I have adopted the strategy suggested by the website when using the resources. First, I ask pupils to think about how they would start to research the topic if they were in an African country to encourage them to consider the importance of language and oral sources in this process. Then I show them the two different maps of the African continent. One was made prior to colonialism, and the second after. I ask pupils the main difference between the two maps, and then discuss some of the medieval African kingdoms. I often find it useful to then select one kingdom and teach it as a case study. I get my pupils to challenge the claim by Oxford historian Hugh Redwald Trevor-Roper that Africa is "no historical part of the World; it has no movement or development to exhibit". I tend to focus on the Benin Empire, using the Benin Bronzes as artefacts, extracts from Olaudah Equiano’s autobiography, and statements from Portuguese missionaries and merchants. There is clear evidence to support learning about trade, military organisation, art, culture, political bureaucracy and power.
Read the ebook

This clip explores the life and victories of Amanirenas, the most famous Queen of the Kingdom of Kush.
Watch this clip 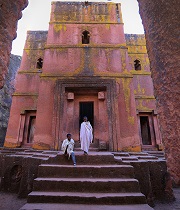 A virtual journey through the Ethiopian centre of Lalibela and its religious buildings.
Watch this clip 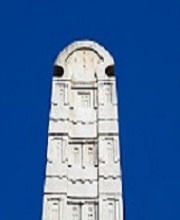 King Ezana converted Axum and its population to Christianity, and this video analyses the legends born around this event.
Watch this clip

African Dominion: A New History of Empire in Early and Medieval West Africa by Michael A. Gomez, published by Princeton University Press, (2019), 9780691196824 Find this book
What Happened When in the World, published by DK Children, (2015), 9781409356592 Find this book
Joshua Preye Garry is Deputy Head of History at a prestigious London school. He has played a key role in developing a KS3 curriculum that reflects the backgrounds of the school’s student body. His curriculum features Black British History, Medieval African Kingdoms and the US Civil Rights struggle. Josh has worked on a number of inspirational projects with respected individuals within the Black History field, including Professor Hakim Adi, Dr Toby Green, Miranda Kaufmann and Jason Todd to raise awareness of the importance of Black History in schools.