English resistance to the Norman Conquest

The Norman conquest seems crushing in its totality, with teaching focusing on the Norman achievement. It teaches that, within 20 years, English leadership had been broken. William’s followers came to dominate the key aspects of the kingdom: land ownership, religion, and the administration of tax collection and laws. Even the English language was displaced by Norman French and Latin.
However, the Norman victory at Hastings overshadows the complex position of the English. Unlike the popular view reinforced by the Bayeux tapestry, Hastings was far from a decisive battle. England was largely unoccupied, and huge areas untouched by war had the resources to raise new armies. Towns and cities such as London, Dover and York were wealthy, fortified and capable of offering resistance. Arguably, it was the divisions amongst the English (who are often taught as a homogenous people) and fatal collaborations, such as that of Archbishop Wulfstan, that sealed the fate of the Kingdom. 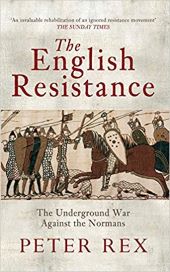 The English Resistance: The Underground War Against the Normans

Rex’ short book is packed with fascinating details of the English resistance, including the failure to rally round the cause of Edgar the Ætheling as the leading resistance candidate for the throne. He cites a major cause of this as the collaboration of ‘the great churchmen’, who handed over ‘the Old English state and its administrative machine’ to William. The book explores issues such as frequent oath breaking by rebels, who had sworn fealty to William – or had they? Intriguingly, Rex explores the language and custom of oaths – were the English thegns and churchmen merely agreeing to a treaty or offering homage?
Following the 1069 English uprising at Durham in which the new Norman earl was killed, the wider rebellion, aided by a Danish fleet, was brutally crushed after the Danes were bought off. When the English dispersed into the woods and marshes – becoming the ‘silvatici’ (wild men or guerrilla fighters) – William launched a grim punitive expedition that laid waste to much of Northumbria and Yorkshire before a forced winter march to crush a rising in Cheshire. Rex broadly supports Orderic Vitalis' near-contemporary account of William’s actions in the North and asserts that this amounted to genocide.
Each rebellion and its vibrant leaders, including Hereward the Wake and Eadric the Wild, are covered. If you are teaching in England, you will find a local tale of rebellion or collaboration to retell to your class, from London and the Home counties to the Welsh border and the wilds of the Tees Valley.
Find this book

The wider military context of the Conquest 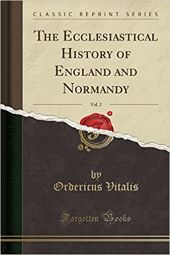 Campaigns of the Norman Conquest

This well-illustrated book gives a concise overview of the Norman Conquest. The campaign maps, particularly those covering 1070–1086, could form the basis to a class project or be displayed in the classroom, as could the reconstructions of warriors and knights. The 1070 map illustrates William's problems vividly, with rebellions sparking across the country.
The short biographies of key characters are useful – for example, Bennett gives a much more favourable view than Rex of Archbishop Wulfstan. Wulfstan outlived the Conqueror, expanded his lands and supervised the rebuilding of Worcester Cathedral in the Norman Romanesque style. Equally, Bennett sees the 'harrying' of the North as ‘a standard procedure of warfare in the 11th century'.
Find this book 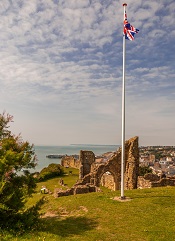 A History of Britain by Simon Schama - The Battle of Hastings

An insights at the days and hours which led to the Battle of Hastings in both enemy line-ups.
Watch this clip

The Norman Conquest by Marc Morris, published by Windmill Books, (2013), 9780099537441 Find this book
Marc Morris on the Norman Conquest, BBC History Magazine's History Weekend, published by History Extra, (2013) Watch the video
Peter Hepplewhite is a retired teacher, and museum and archive education officer with a particular interest in local history. Since retirement, he has been working with schools to deliver short, cross-curricular projects for Key Stages 2 and 3, covering aspects of the First and Second World Wars.